A selling point of both of these shows is that the works shown are “one of a kind” (Muniz) and “unique” (Marclay)l.
Actually, they are manufactured objects which they only made one of. High-end manufacturing—but still. A major trend in luxury goods, don’t you know— there’s a unique Adidas shoe, for example.
Muniz and Marclay have both made some good work. Muniz filmed himself repeatedly painting a portrait with water on a hot rock. He has skills. Also the chocolate paintings—they connected painting, photography and the ephemeral in a wonderful way. You could almost taste it.
In Muniz’s show, Surfaces, he has taken detailed photographs of 15 famous paintings and glued them onto various levels of cardboard.

This is the original of Auxerre:

Even in this out-of-focus online image, it’s possible to see how subtle this painting is—it leads us into thinking about how fine-tuned our sense of sight is and the inferences we are making about distance when we look at the world.

Muniz’s version loses the push and pull that Hofmann is famous for. It looks very flat. I suppose to compensate for that he added the relief which makes no sense whatsoever.

The press release states:
“This entropic(*)  negotiation of material loss and virtual gain pushes the viewer to question their relationship to the physical experience of an artwork, as images are so overwhelmingly mediated by the convenience and ubiquity of digital technology.”
I’ve had the same experience that the Muniz show offers at The Metropolitan Museum—averting my eyes and hurrying past the digitally produced banner images that introduce their shows.

Take Bearden’s “Untitled” so tentative, so human– it’s a record of a thought process. Muniz’s version, blown up to almost twice the size— cynical, didactic and exploitative. And Bearden continues to explore in each of his works how a picture can be made that is full of connections and feelings. Muniz comes up with a formula that can be applied to any art work and multiplied endlessly. 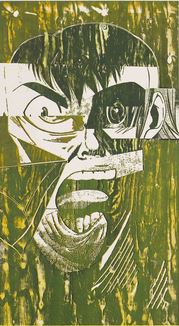 Marclay made a pleasant film about time, (The Clock) I enjoyed an hour of it.

But what’s this? Manga is so cool!—Let’s blow it up to contemporary art world dimensions and sell it as (I’m assuming) horror at the contemporary situation—a guy mouthing “Yikes”!

Also conceived as a tribute to Munch’s Scream, “It had a huge influence on so many people and I like the way he allowed the wood to be present,” he explains.**

The images are laser cut on plywood and they look like it.

I could laugh at or ignore both of these shows, but art means something to me. Collectors play an important role—buying and preserving  a visual record of human feelings and thought in our time. I hate to think they might be gullible enough to fall for this nonsense.

There are so many great contemporary painters who can’t be shown in Chelsea. They don’t work fast enough or big enough to fill up warehouse size galleries and their paintings don’t fit easily into luxury merchandising schemes. But the artists and the paintings are far more ambitious—they give more.

*Two definitions of entropy (in case like me, you forget.)
-in data transmission and information theory, a measure of the loss of information in a transmitted signal or message.
-a doctrine of inevitable social decline and degeneration.