These are snapshots I took a few days ago which Uli Lorimer, Curator of the Native Flora Garden, kindly identifies and explains how they fit into the ecosystem. Yes, even in New York City we have an ecosystem! And we could have a better and more interesting one if we paid more attention to the natives and planted them in urban gardens and tree beds or simply didn’t weed them out. — CNQ

Both of the above plants are members of the Aster family and provide crucial late season resources for pollinators. Once their seed has ripened it is a great resource for birds like field, fox, and house sparrows amongst others.

With its flat umbels of yellow flowers, Flat Top provides the perfect “landing pad” for insects, pollinators, and butterflies alike. Again, an Aster family member with similar ecological traits as the others described earlier.

White button like flowers. Also an Aster family member, the common name for this plant comes from a belief that it contained an anti-venom to snakebites. Very common throughout our region and a crucial floral resource for insects and pollinators.

This Rose family members blooms in the spring with delicate white flowers which give way to the fruit by the fall. The fruit starts off red in color and matures to a dark purple almost black color when ripe. These are highly prized by migratory birds and usually are all consumed by the time the first snow falls in December. Cedar waxwings and sparrows have been observed in the garden eating these fruits.

The large seed pod is visible in the image. This plant is a major food source for Monarch butterfly caterpillars as well as a nectar source for many other insects. The plant contains a toxic compound called a cardiac glycoside which makes it unpalatable for all organisms except for the monarch. The orange and black markings on the Monarch’s wings are a warning sign to potential predators as the butterfly takes on the same defensive compound found in the plant. Most birds will avoid Monarchs for this reason although young birds may try and give it a taste only to come away with an upset stomach. It’s well suited for city gardens, but if you have space to let it roam it will be a boon to local insect life in addition to Monarchs.

Known for its hot pink inflorescences and berries, the birds simply love this stuff!! As you can see from your image, not many berries remain, as they have all been eaten already by a wide variety of birds, both migratory and year round residents. From a human perspective, the young emerging shoots in the spring are edible and make for a tasty poke salad. And the juice from the fruit can be used to dye textiles. Although uncorroborated, I have heard that the Declaration of Independence was signed with poke weed ink! (Not sure if true, but still pretty cool.) Because birds eat its fruit with such relish, it often pops up under trees and shrubs as the birds evacuate the seeds a short time later.

What is a native?

The Garden has for a long time defined native as any plant growing within a 100 mile radius of NYC, a definition that I have sought to change. Plants don’t care about our political boundaries and don’t identify as NY’ers or NJ’ians. They are distributed across our landscape based on the restrictions of geology, soil, water, and light. We sit at the confluence of three major physiographic regions (the Coastal Plain, the Piedmont, and the ridge and valley). Coastal plain plant communities are distinct from Piedmont and ridge and valley. Ridge and valley arose from the influence of the last glacier which carved out valleys from erodible rock (like limestone and shale) and left behind ridges of resistant rocks (sandstone conglomerates, granite, gneiss). Our flora has developed in response to those influences. So what is native here? I consider plants found in all of NJ, all of CT, and in NY as far north as the Catskills and west as Sullivan County to be appropriate. Plants from say Maine or NH are adapted to different conditions, i.e. shorter growing seasons, colder climate, while plants from say the SE (GA, SC, NC, VA) are used to longer seasons and hotter weather.

Why does this matter where plants are from?

By using locally sourced plants we can tap into local genetic diversity and tap into the thousands of years of evolution which have adapted our plants to our climate and soil conditions. The grassland and pine barrens section of the Native Flora represent what a rich, diverse landscape can be created by using local plants. Prior to our expansion the site contained mostly lawn (low diversity) and a few trees. Now, it boasts over 180 species of plants (ferns, flowers, grasses, shrubs, trees) along with countless species of insect, aquatic invertebrate, and animal life. The plants form the basis for all of these relationships and interactions.

Here is a link to an image of a praying mantis in the garden: 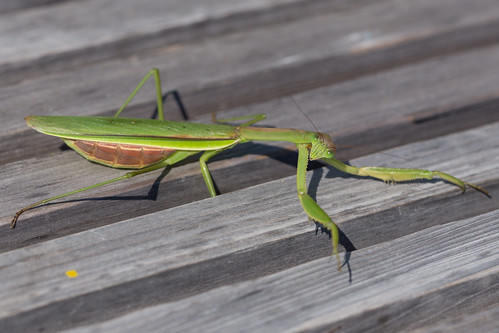 And here is a link to some more images from the BBG over the years:

And here is an unusual picture of Uli outside without his sunhat: