After years of travelling to Williamsburg to get my hair cut, I decided to try my local barbershop in Clinton Hill, Miracles. During my second great haircut by Anton, who turned out to be the owner of Miracles, I asked him about the unfinished mural on the back wall. He said it was the work of a Pratt student who never came back to finish it. I showed him an image of the two-story mural I had done for the city under their Percent for Art program. I said that I could do something similar in the barbershop depicting all the stuff the barbers use, clippers, scissors, etc., but that in my own artwork I was very interested these days in corporate logos. Anton said, “I want the logos.” Since its completion, I’ve had conversations with Anton and a few of the other barbers about the mural. A barbershop is a place where people speak their minds and conversations can include several people. Anton had said that he wanted something that would attract attention and be talked about. I think the mural is doing that. My own private survey fielded a range of opinions. All of them were important to me. Some were critical,

“What does this have to do with the barbershop?” Others were very positive including the opinion of Kokayi, who has a night schedule and was often the only barber there while I painted, (I usually painted after 9:30 pm when most of the barbers had gone home). I remember him saying, “Anyone can come in here and see something in that painting that they interacted with that very same day. And the way these symbols are overlapping is the way they overlap in our lives.”Adam Simon Pictures of the mural interspersed with reviews of Miracles:

“Anton is an artist. The cut he gave me is a masterpiece. Sharp and even. I’ve been getting complimented by everyone from friends to complete strangers.” 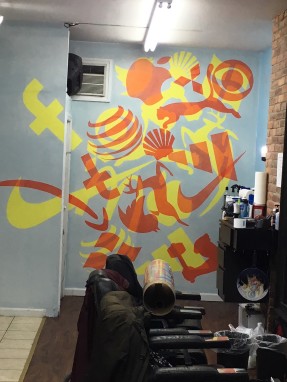 “What drew me here was the laughter and positive vibes seen through the window shop. Not sure of the Barbers name but man you did a dope job. As soon as I left the shop I received compliments on the cut.”

“I personally entrust my hair to Cliff but any barber in here will get you right.”

“Today was my 1st time at Miracles.  My experience was awesome.  Not only did Anton hook a sister up but I liked his honesty and how he talked me through my cut.”

“The barbers lines are precise! You are walking out looking fresh!”