Cristoforo… is not literally Morley’s first work. It was painted in 1966, after a correspondence art course (from prison), the Camberwell School of Art and the RCA and also after he had moved to New York to be an abstract painter, exhibited there and was teaching at Ohio State University.

However, this painting, the earliest in this show, is the work of an inspired amateur, i.e. a person who is fascinated by their subject. It is lovingly painted. I don’t know of any other painter with that much education who could—or would—paint like this. He was digging deep to find an alternative to abstraction. I felt very touched by it, flooded by an early memory of my own. It is most likely painted from a postcard which is not quite the same as a photograph if you see what I mean.

After that, Morley explored photorealism; he is credited with being either the first or among the first photorealists. I’m not very interested in his portraits, his football players or his racers painted from photographs. They are the work of the man, but his best work is the work of the boy. Some reviewers have pegged his subject as adolescent fantasy, but the boys I know who love knights and castles and planes and ships are much younger than that.  I suppose you know that his childhood was interrupted by WWII and his house was destroyed by a bomb.

I saw Morley’s work for the first time in the early 70s and I’ve been alternately excited by it and disappointed by it ever since. I would get interested in how he created space with paint and then I’d go to his show and he’d be hanging model planes all over them. What kept me going back to see, though I do not share his boyhood passions, is the lack of nostalgia, the pain of loss that is not explicit but present nonetheless and the surprising playful inventiveness that animates his work.

I asked at the gallery whether St George… was the last painting and the person did not know but I felt that it was and later read in Art in America that it was (update the gallery has now confirmed it.)

Many of the knight paintings are static compositions, reminiscent of a boy lining up his models, studying the heraldry; all of it meaning much more to him than to anyone looking at the scene because for him the swords are clashing. Melee at Agincourt (pictured below) is like that. The riders are motionless, the flags are unfurled au point—but Morley called it a “melee.”

I looked at it and admired its patterns and rhythms—check out the staccato zipper effect that runs down the center.

But then I saw St. George…. a paper cutout of a knight painted over a George Caitlin landscape, Prairie Meadows Burning (pictured below).
You know what got me? The last flourish of a great painter: Morley gently used a dry brush to blur the wet gray hooves and set his world in motion. 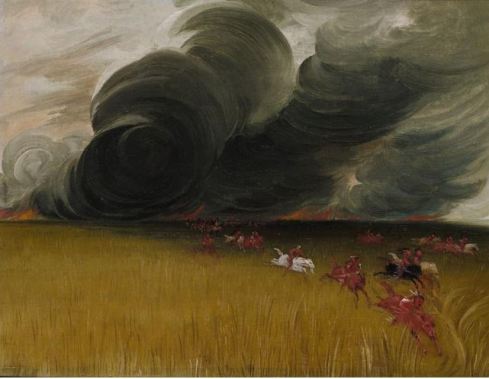 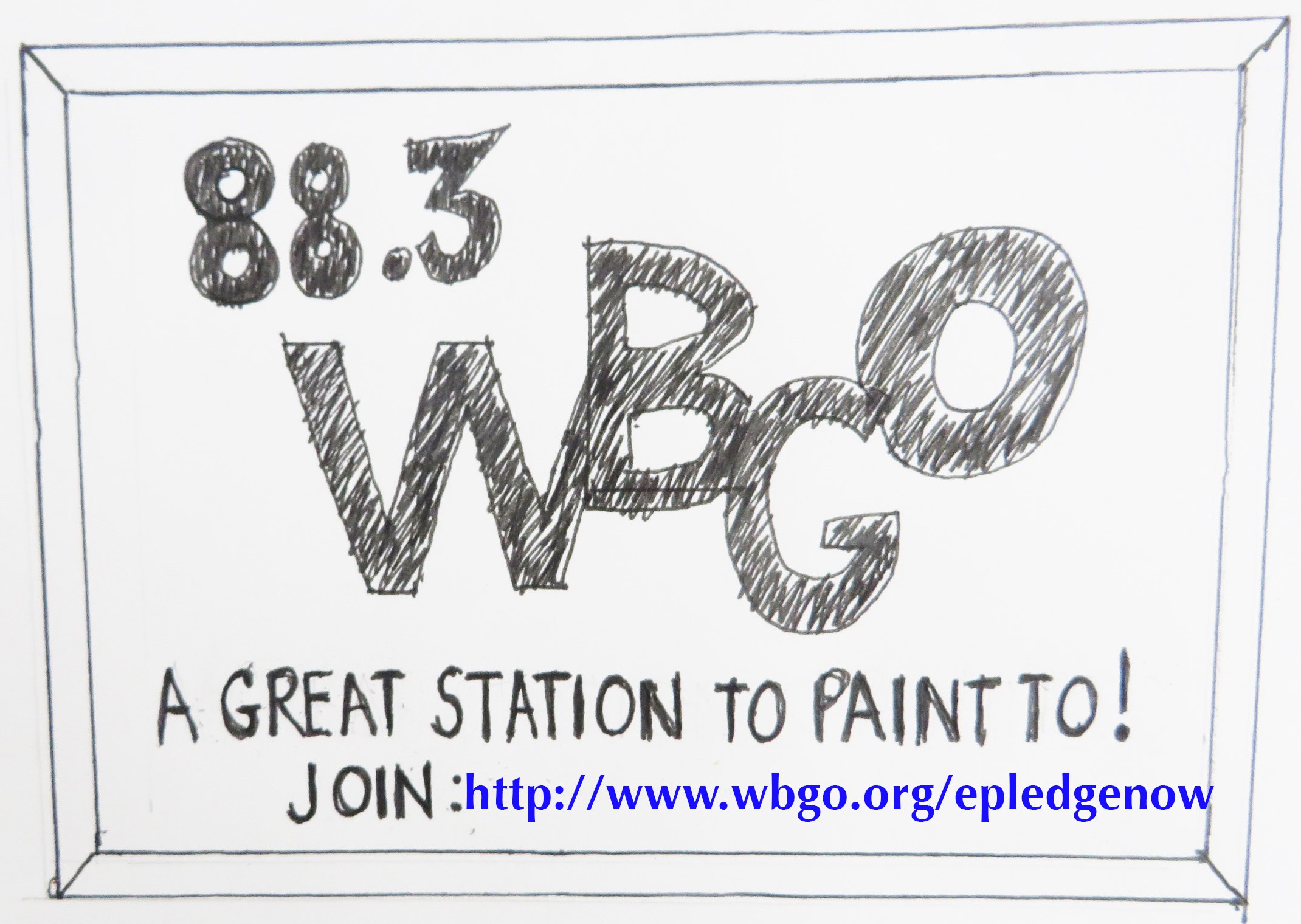 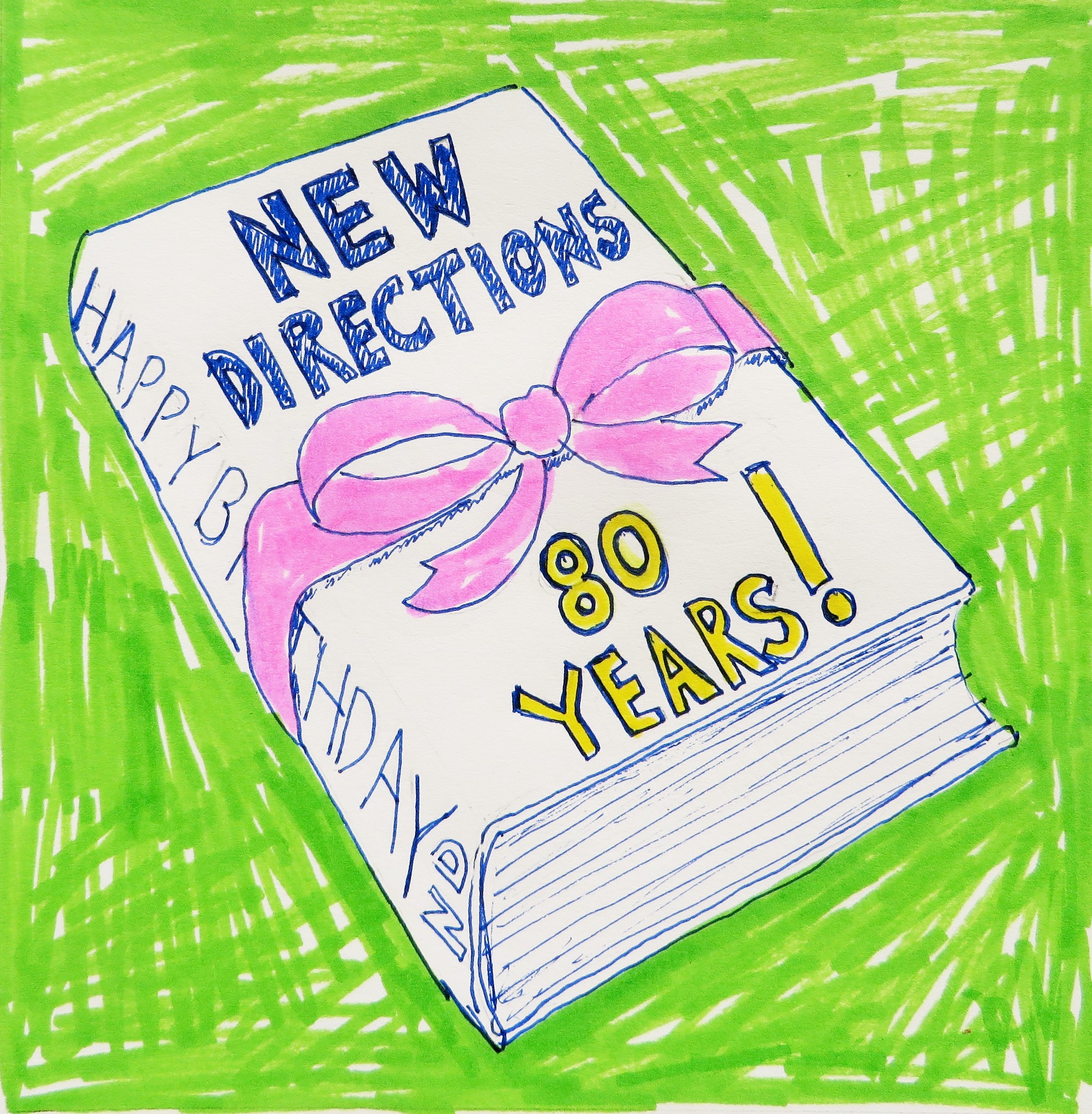