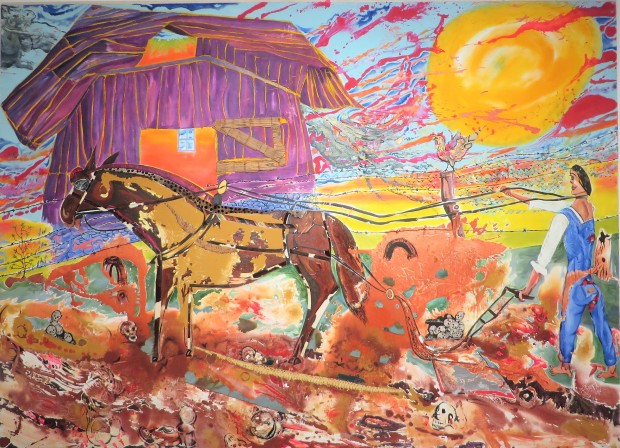 The sensation of being pushed away from a rotating axis, popularly called “centrifugal force,” is a delusion; what you are actually experiencing is your own inertia.
Something to think about when encountering the spinning top that is Brett de Palma’s work.

Centripetal forces as well, and the first painting to exert it was “Skullduggery.” At first glance I thought that it (and other paintings) depicted a post-apocalyptic future, but it’s much more interesting than that. The barefoot farmer with the horse-drawn plow is neither in that future (when gas and replacement parts may not be available) nor is it a period piece—he or she (that’s not clear either) is in a present that contains all of the above and is simply the most effective image of “a farmer.”
The plow is turning up skulls and that comes across as a matter of fact; we are always working the same fields as those who came before. The sky, just a sunset? But charged with all the winds and fires and storms of this year (2017) and the unbidden thought that all farmers everywhere for all time have kept and must keep a nervous eye on the sky.

It crosses my mind to wonder if in the early years of The Dust Bowl, there were people arguing that it was not a man-made disaster.
Also I read an article in the Guardian the other day about the suicide rate of farmers: twice that of military veterans in the US now and a global crisis.
All the while I am being repelled by the snakeskin collaged onto the rooster and the snake vertebra pressed into the ground below the horse and the barn that keeps looking like a shirt… 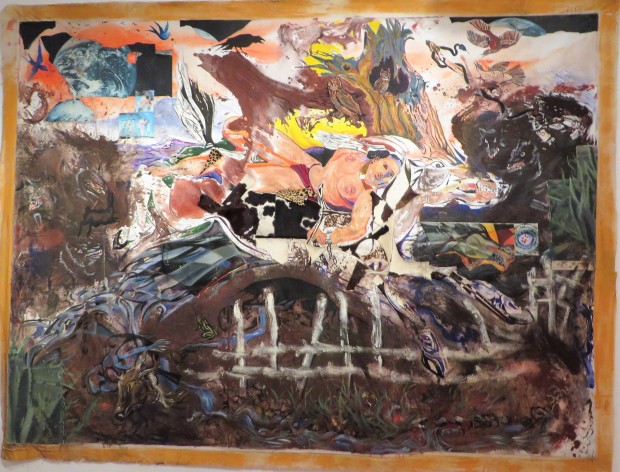 The second painting that called me over was “Mazeppa”.
(I now know that Mazeppa was a Cossack who slept with a Countess and the Count punished him by tying him to a wild horse and Byron wrote a poem about it.) (For an excerpt and a link to the whole poem, see below)
In the painting, the protagonist (again I am a little uncertain if they are a man or a woman) claims my first attention until I notice the frog center lower left:

Followed by the buzzards eating a deer: 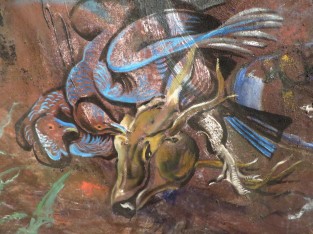 And the startled rabbit escaping the hooves:

And the wolves menacing on all sides, birds, snakes and the fish and the plants and the stream, one image succeeds another like I am watching a film—and not knowing if it is day or night. This is an extraordinary painting and my response is not a series of thoughts but a visceral experience of the wild ride—everything about it is completely different than “Skullduggery.”

I don’t know why but the central figure of a drunk in the road with the cartoon version of moonshine reminded me of van Gogh’s “On the Road to Tarascon”.
In the photograph it makes more sense, but in the physical experience of the painting, it is hard to reconcile the foreground figure, it does not seem to be in the same physical space as the drunk, the dog, the horse and the
hotel (?).

Then the troops with their bayonets start marching in from the left and if you go back to the painting, do you see that they exit stage right? Maybe it seems obvious when I point it out but for me it took quite a while to recognize them and believe that it was an intended image. And then I travel down the road stuttering from figure to figure and from the Xs on the bottle to the Xs on the sign in the distance.
Here is the narrative I constructed (perhaps a symptom of apophenia, the tendency to attribute meaning to perceived connections or patterns between seemingly unrelated things): The foreground figure is a dead soldier, an agonizing memory for the drunk in the road, of a war that the drunk “survived” and drinks to forget.

Here are some drips on the side of another painting that became a herd of elk: 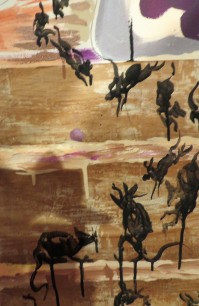 And then it was enough, I couldn’t see any more, I spun off out the door onto 1st Street.

“Bring forth the horse ! ” — the horse was brought;
In truth, he was a noble steed,
A Tartar of the Ukraine breed,
Who look’d as though the speed of thought
Were in his limbs; but he was wild,
Wild as the wild deer, and untaught,
With spur and bridle undefiled –
‘Twas but a day he had been caught;
And snorting, with erected mane,
And struggling fiercely, but in vain,
In the full foam of wrath and dread
To me the desert-born was led:
They bound me on, that menial throng;
Upon his back with many a thong;
Then loosed him with a sudden lash —
Away ! — away ! — and on we dash !

For the complete of “Mazeppa” :