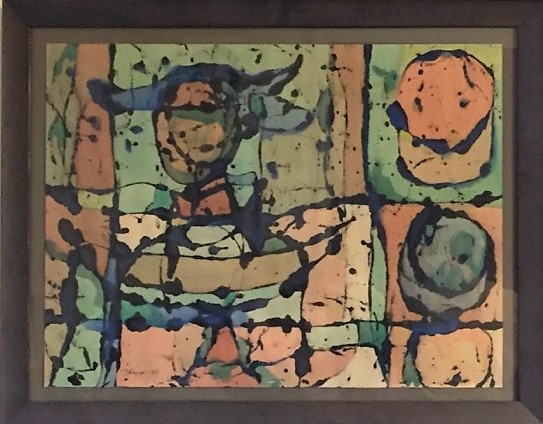 I never thought Mr. Russell Twiggs knew or noticed me. I was the child who scrambled around the Beaux Arts building at Carnegie Tech on Saturday afternoons while my dad was working, waiting for him to be free for our weekly-weekend visits. Mr. Twiggs was the tall taciturn man who strode through hallways. I never really heard him speak. So when— as a high school student—I encountered him one day at the foot of an entrance stairway and he stopped me, I was taken by surprise. He said he was looking for people to give a painting to, because he wanted them, and what did he say…. to be taken care of after he died? I can’t precisely remember what he said, but that was the definite inference. So we went to the top attic floor, where he and other Arts faculty members were given small, light flooded studio spaces, and he let me finger through his works and choose a piece.

Russell Twiggs wasn’t teaching faculty. His title was Massier. He advised students, arranged student critiques, and hung exhibits. The Beaux Arts building housed five arts: architecture, design, drama and music, with workshops, practice rooms, a theater and a recital hall; its mezzanine was constructed as a long central grey stone hallway, with niches that had been emptied of statues for years. Each department had many nooks and crannies; I knew every corner of it then, most of which have now been closed off or locked behind steel doors.

According to the school mythology, Mr. Twiggs defended Andy Warhol from being discharged from Carnegie’s School of Fine Arts after his freshman year. Twiggs is also known for participating in Group A, “The Abstract Group” which was founded in 1944 by him and his colleagues: Samuel Rosenberg, Balcomb Greene, and Robert Lepper.

Twiggs’ painting lived in our Pittsburgh home. It took me twenty years to ask my mother to give it up to me, here, and another ten years to frame it correctly. It is on a standard 18”x24” sheet with staple marks at the edges. I am guessing acrylic on paper since it has both fluidity and weight, but it is large in its mental scale. It is subdivided into several compartments with Pollock-like fluid lines, alert to the spreads and blobs of their bilateral edges. It has curious unidentifiable circles stacked on one edge that, resistant to identity, are both Euclidean and organic. It is in oceanic blues and greens and ochres, which seem no less deep than they did so many years ago. It is so abstract, that it takes time to recognize the harlequin figure with its tri-flap hat over an ovoid head which holds the gravitational field to the right. Now alongside other beloved works in my apartment, Mr. Twiggs’ painting has gotten into my bones.

To subscribe to Talking Pictures, see link below or on the right side of the home page.